In the most traumatised place on earth, a search for peace

‘I TRY TO BURY THAT PAIN’: ROHINGYA REFUGEES ON THE TRAUMA THEY CARRY

A Witness Change story with photos and text by Robin Hammond. This work was made in collaboration with Medecins Sans Frontieres and The Guardian.

One of life’s greatest misconceptions is a simple fable. That time is a healer. One year ago on the 25th of August “ethnic cleansing” perpetrated by the Myanmar military against the Rohingya sparked a massive refugee crisis. Nearly a million Rohingya – those who escaped the flames and executions – are now living in camps in Bangladesh. Many of them were raped, most saw loved ones killed, thousands arrived wounded. All are traumatized. Here, in this impoverished monsoon soaked corner of Bangladesh, is one of the most densely populated areas of PTSD affected and depressed people on earth.

Here, time has not healed.

Fleeing flames and bullets, the Rohingya had little time to gather their possessions. Crossing monsoon-swollen rivers and trekking through sucking mud, what they held onto tightly were their very young, their very old, their injured, and their religion.

The Rohingya are a Muslim minority in Buddhist Myanmar. Their religion and their distinct language cast them as foreigners in the eyes of their Buddhist countrymen. Decades of marginalisation and persecution have stipped them of much, but they would give up their faith for nothing.

In the Bangladesh refugee camp where hundreds of thousands of Rohingya live, mosques have been built. So have Islamic schools. On an empty white World Food Programme sack, 12-year-old Johura Begum sits reading the Qur’an in this bamboo-walled madrasa, obediently reciting verses in Arabic. She sits slightly apart from the other girls, who giggle covering their faces with their scarves when a camera is raised to take their picture. Johura doesn’t laugh with them. That kind of laughter is not part of her life. Not since she watched 14 of her 16 family members be killed. 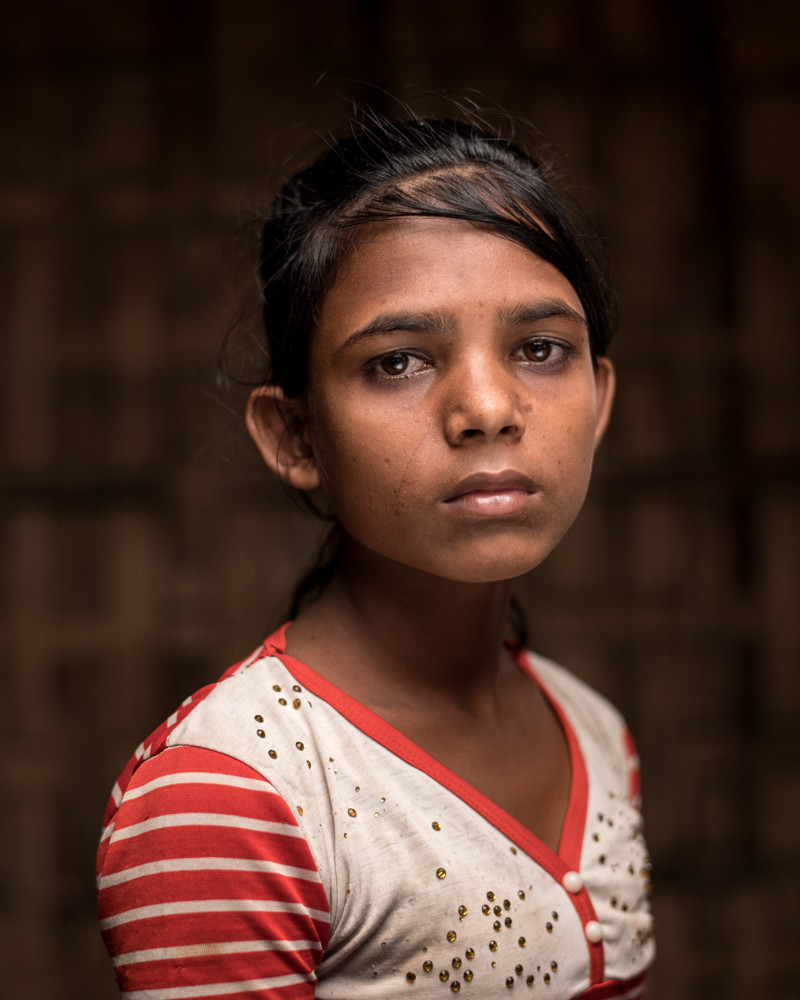 Rohingya refugee Johura Begum, 12, lost 14 of her 16 family members when the Burmese military attacked her village in Rakhnie state, Myanmar.
“When I think of my parents I don’t feel good eating.” Do you think about them often? “Yes. I do. With every breath I take” Johura Begum

Nightmares take her back to the execution of her parents and siblings. But her most regular dream is of eating a meal with her mother and sister in their Myanmar village.

What food do you like? “I don’t feel hungry.” Ever? “If I feel very hungry I have a little rice.” Why don’t you enjoy eating? “When I think of my parents I don’t feel good eating.” Do you think about them often? “Yes. I do. With every breath I take.”

“I do not feel peaceful,” Johura says.

Johura Begum reciting verses from the Qur’an in a madrasa in the refugee camp. 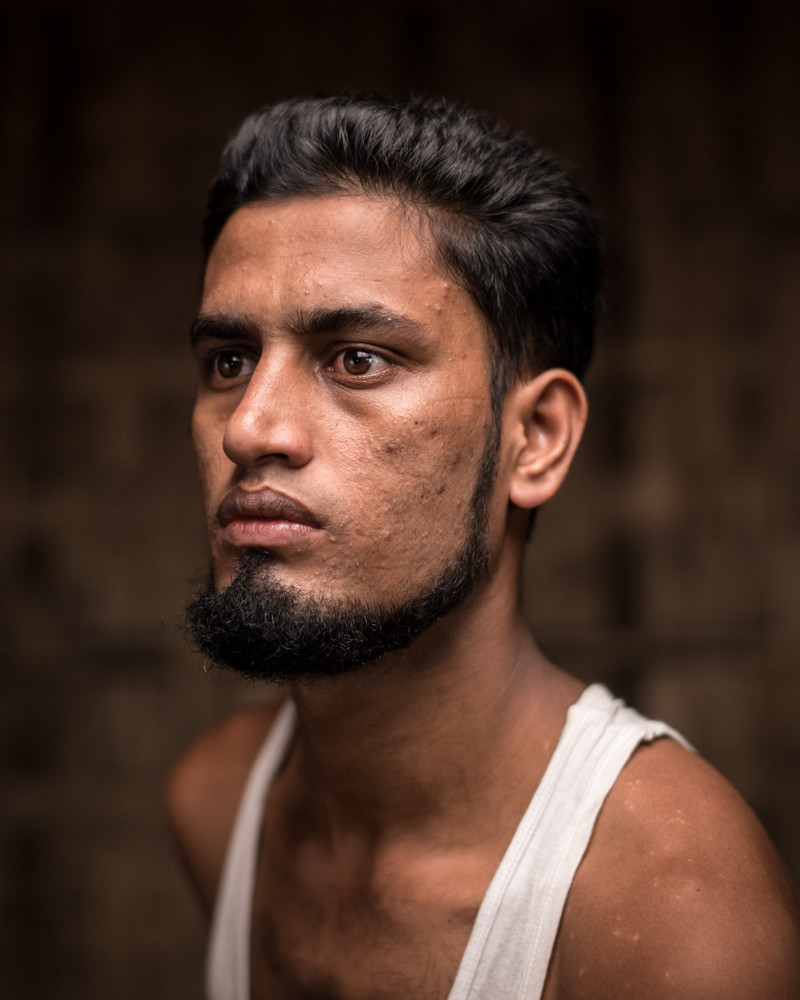 23 year old Asmot Ullah was shot in the leg while fleeing the gunfire and flames engulfing his village. He looked up from the ground where he fell to see his brother stumble after being shot in the stomach. His brother died where he lay.
“I’m thinking about him and I feel very unhappy… I’m thinking about my brother day and night… when i think about him I do not feel peaceful.” Asmot Ullah

“Mental illness” does not translate into the Rohingya language. Instead they talk about a peaceful state of mind to express wellbeing. Un-peaceful minds are troubled, depressed, anxious, traumatised.

The Rohingya have more reason than most not feel at peace.

The severity of the violence they have faced is difficult to comprehend. There have been many accounts of men being rounded up and killed. Women have been raped. Some women and children have been killed too. 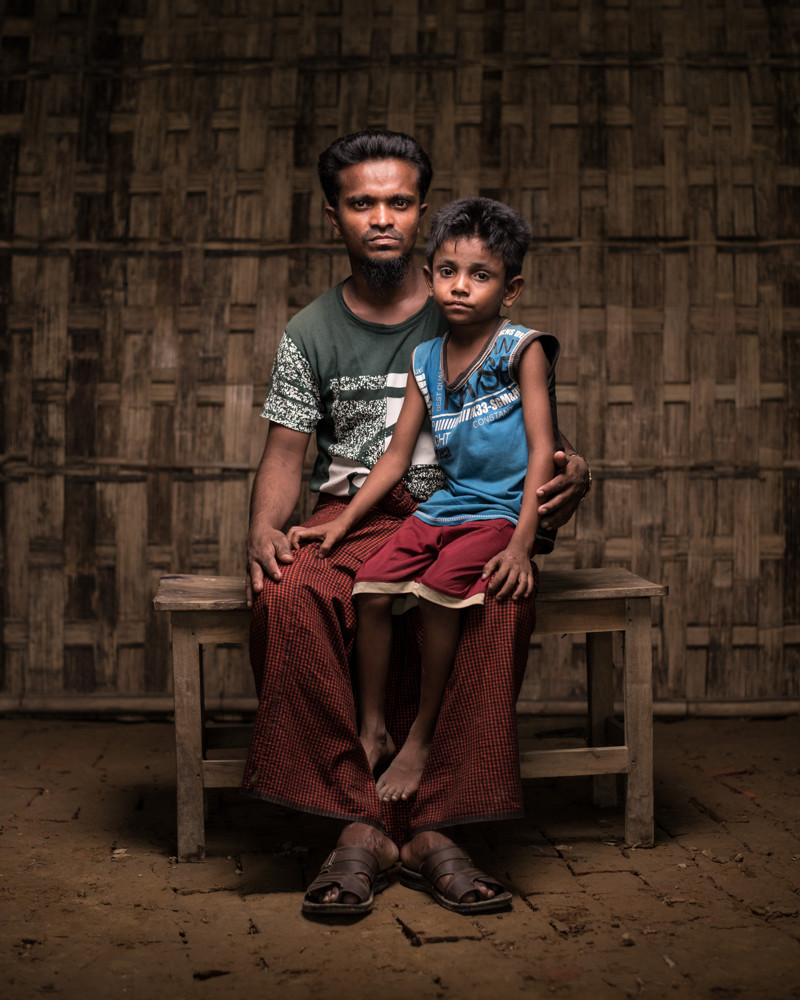 26 year old Mohammad Yunis, with his son Mohammad Osman, fled Myanmar after witnessing relatives being beaten and killed. Médecins Sans Frontières provide him with counselling and medication to treat his mental health issues.
“I’m not feeling well here… My brain has become out of control… I used to be fat. I’m getting thinner and thinner day by day thinking about what happened.” Mohammad Yunis 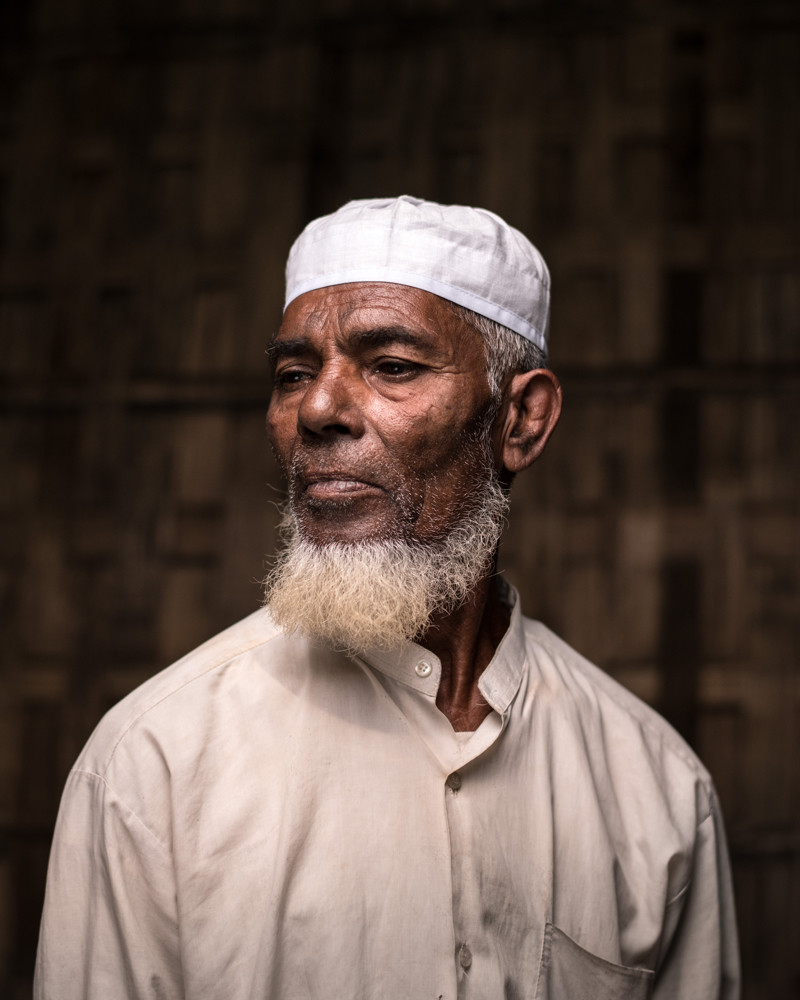 70 year old Noor Alom lost his sense of self when he was forced off his rice farm in Myanmar and became dependent on aid to survive.
“I was happy with my family [in Myanmar], now that I cannot support them, or move freely – nothing makes us happy. If we were home we could celebrate [the Muslim festival of] Eid. But we can’t do that here, we just sit and wait.” Noor Alom 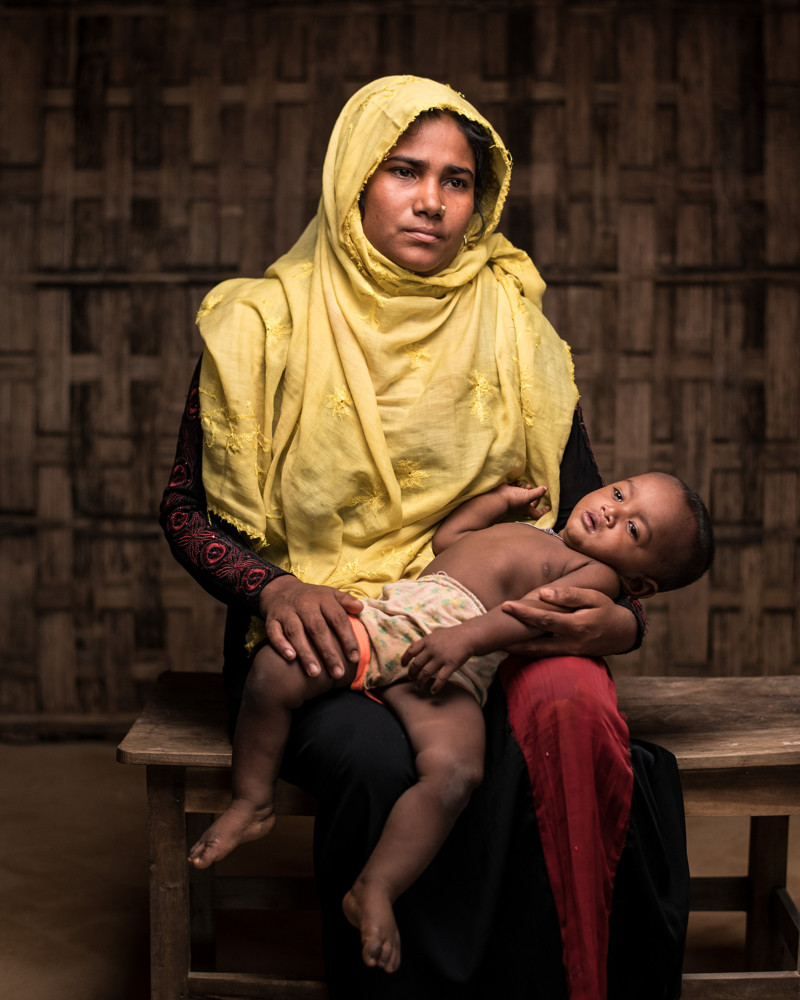 25 year old Rohima Khatun arrived in Bangladesh on the 18th of September 2017 about to give birth to her son. Her husband and four year old child were murdered by the Burmese military in Myanmar.
“Every single moment I remember this and get emotional because I lost my neighbor, husband, child, relatives.” Rohima Khatun

Rohima Khatun’s story is typical. After encircling her village, the Myanmar military started burning houses. Through the smoke and heat strode the uniformed executioners and rapists. They went house to house and shot the men. Rohima saw her husband killed. The women were gathered in the village school. Rohima, five months pregnant, held her four-year-old to her chest, and her six-year-old to her side. The older of the two was screaming. A soldier marched forward, picked him up, and threw him into the burning flames of a house.

Then the raping began.

Somehow Rohima, in a state of shock, managed to slip through the smoke and into the jungle. She saved herself, her four-year-old, and her unborn child.

“Every single moment I remember this,” she says. “And I get emotional, because I lost my neighbour, my husband, my child, my relatives.”

Rohima Khatun in the refugee camp that is now her home. She comforts her son who has a fever. 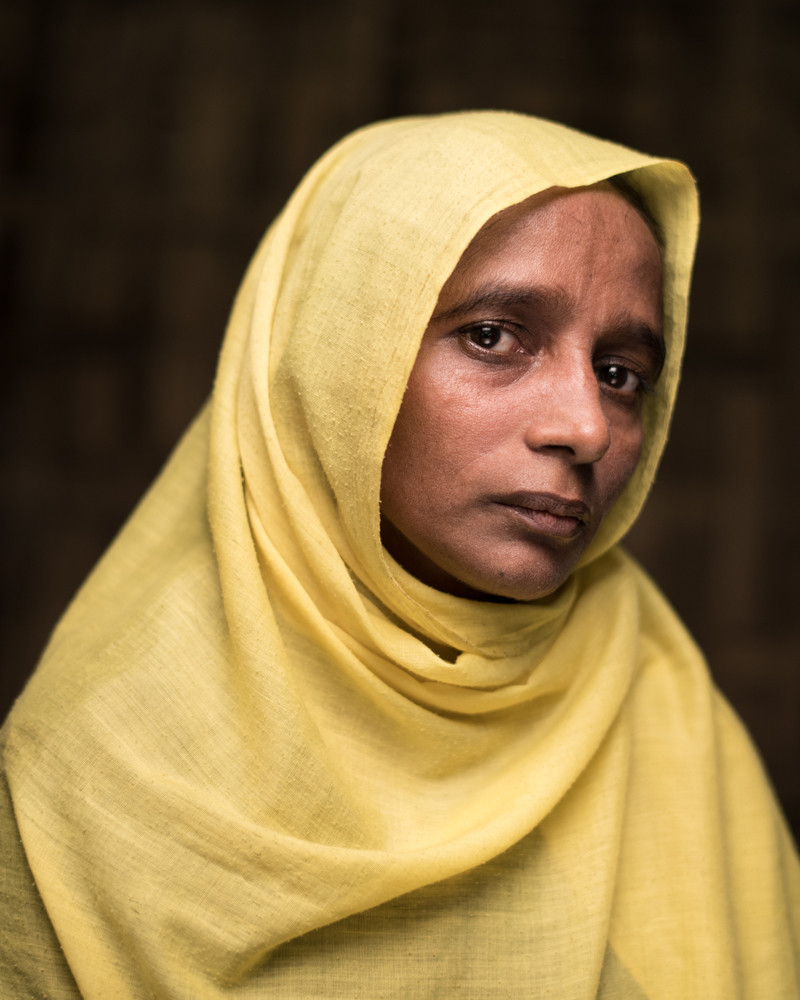 While the physical wounds of the surviving Rohingya have healed, the psychological scars remain. Few have been left unscathed.

Refugee camps are what some organisations working in mental health call disabling environments. “It is really hard when they are living in the camp to be able to cope,” says Jodi Nelan, Médecins Sans Frontières (MSF) mental health activities manager. “So a lot of people find it difficult to move forward.” 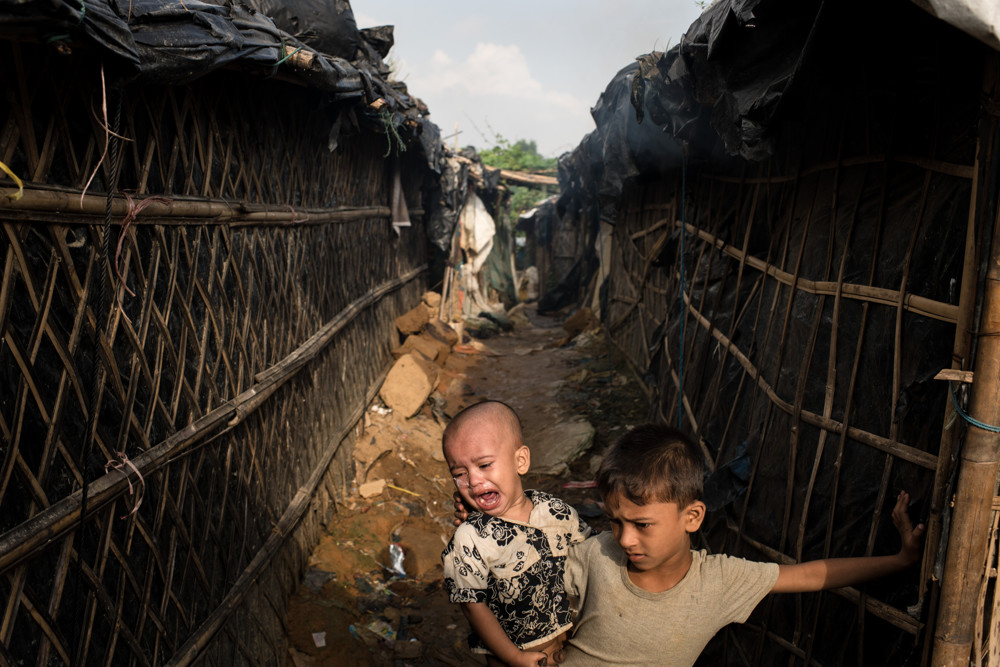 Rohingya children in a refugee camp in Bangladesh. Refugee camps are often described as “disabling environments,” – situations that make healing difficult, can exacerbate mental health conditions or can even cause them.

Nelan heads a team trying to help people get back on their feet. “They can learn to put their lives back together,” she says. “They do that by relying on coping skills. We can help them.” A team of MSF counsellors has carried out 5,700 individual consultations and just under 12,000 group sessions.

In the most recent months MSF psychologist Shariful Islam has seen a shift, from symptoms indicating trauma to “depression, anxiety, hopelessness and domestic violence”.

“They say: ‘I don’t have any hope and most of the time the scenery comes to my mind, how they tortured me, and how they killed my mother, how they killed my very small child. And when I remember all of this I can’t keep control of myself and how I behave. Sometimes I beat my family member.’ We are noticing that this kind of patient is increasing significantly.” 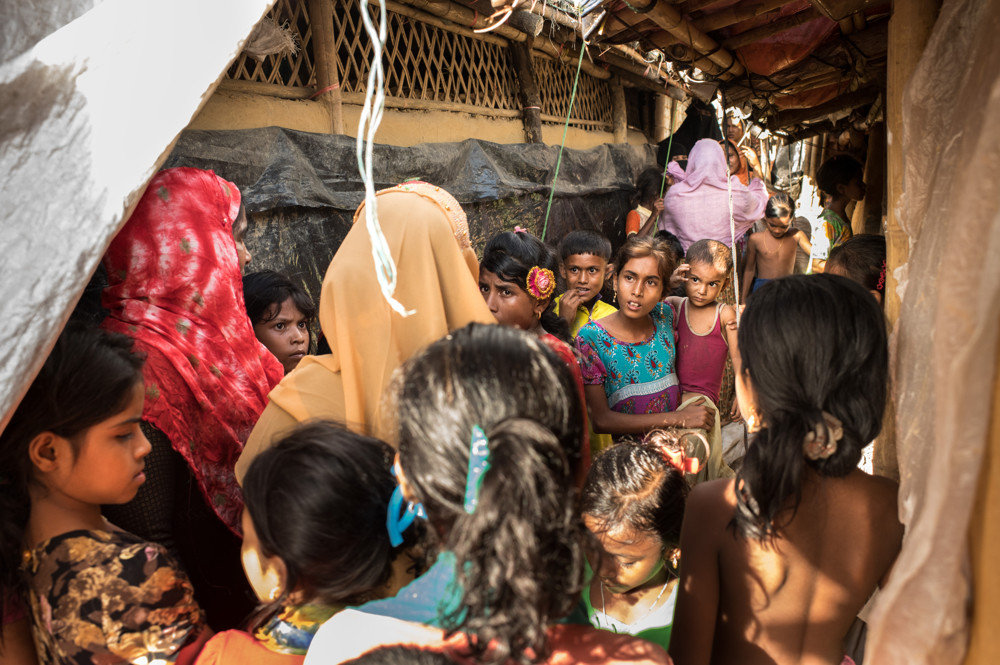 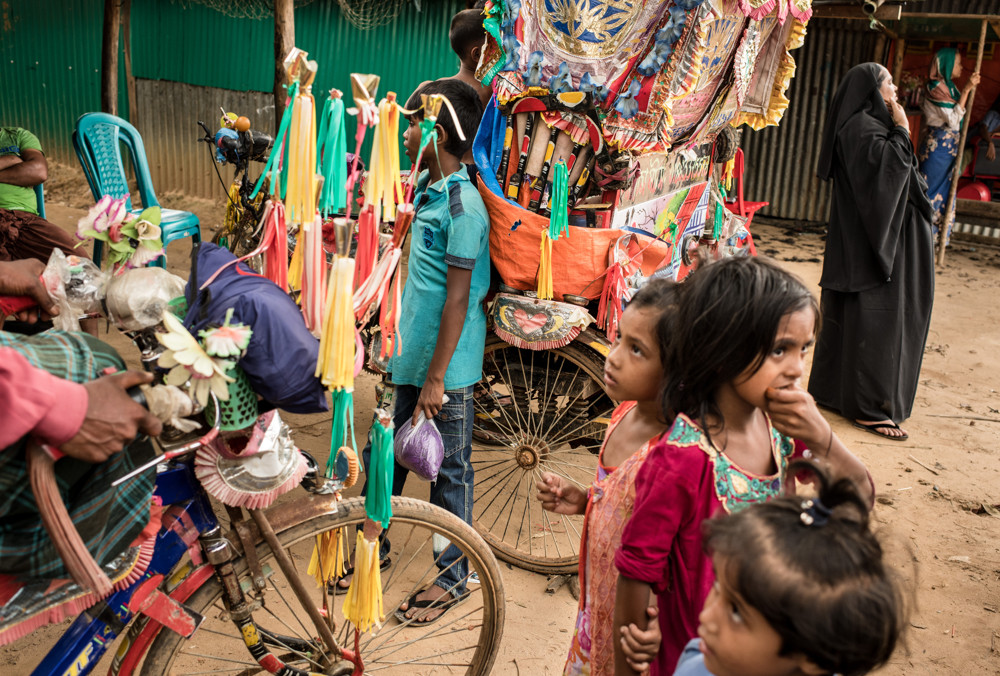 Rickshaws gather to take passengers through the muddy streets of a Rohingya refugee camp in Bangladesh.

Heightened aggression is associated with PTSD and some victims of violence are developing mental health issues that see them perpetrate abuse. When societies and the connections that bind them are ripped apart, piecing them back together rarely results in full harmony.

The situation differs for men and women. Women can still be carers and mothers, and run affairs inside the house. In this conservative culture, men are expected to be protectors and providers. Unable to work, and watching their families live off handouts, many feel useless – their role and identity taken from them. 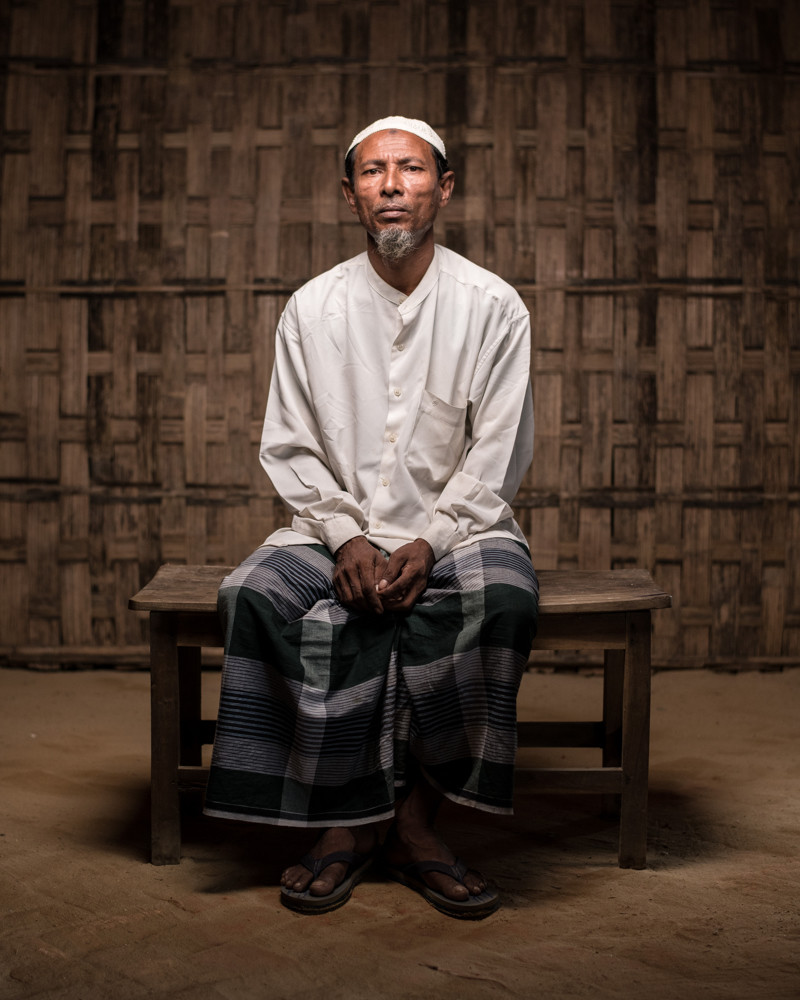 In Myanmar 47 year old Abdul Hafez was a farmer and provided for his family. In the camp he cannot work. Losing his sense of self has added to the trauma he lives with.
“I often remember what happened, I try not to be angry, sad, frustrated – I try to bury that pain and sleep more… Some days in my dreams I see what happened there, like them hitting people. I see these things often.” Abdul Hafez

Abdul Hafez, 47, used to be a farmer but his life has been turned upside down. “I can’t provide the things that my women and children are looking for,” he says.

Losing his sense of self has added to the trauma he lives with. “I often remember what happened, I try not to be angry, sad, frustrated – I try to bury that pain and sleep more.” 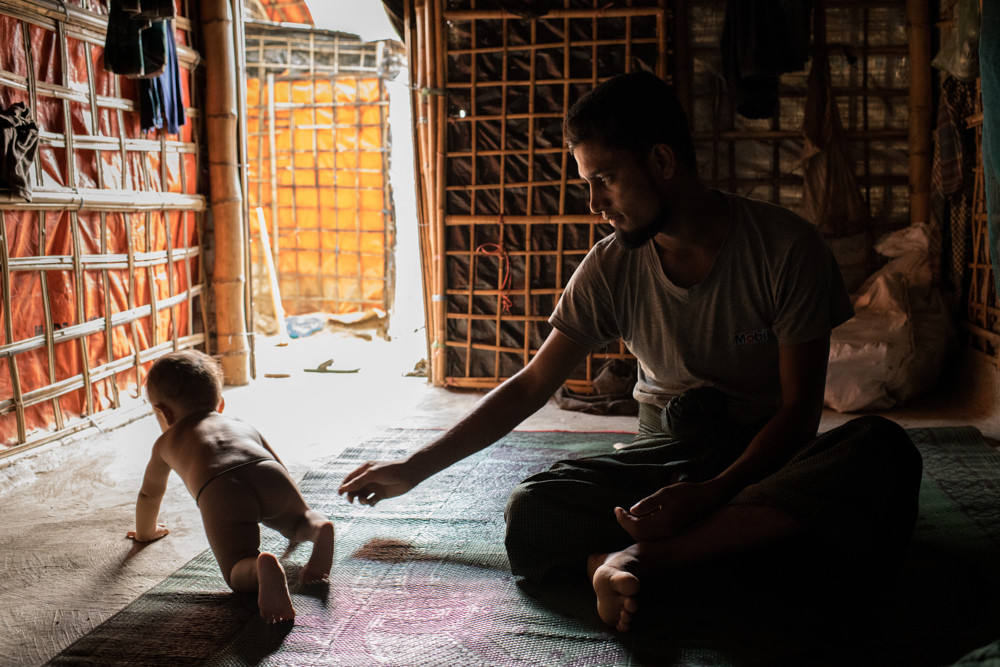 23 year old Asmot Ullah fled his village of Myinslut, in Myanmar on 25 August 2017, the first day of attacks by the Burmese military. He was shot in the leg as he ran. While he lay on the ground in agony, he witnessed his brother being shot and killed.

Some families have been in the camp since 1991. Despite the difficulties they face, aspects of normal life continue.

12 year old Johura Begum in the bamboo and plastic shack which is now her home. From her 16 member family, only her and her brother survived the attack on her village in Myanmar.
“If my brother is happy, that can make me happy – in here, he is the only one who can.” Johura Begum

The suffering here is immense, but walking through the camp, it is evident how much life there still is here. Children are born, couples get married, boys play football, girls apply makeup. The vegetable market is busy, the call to prayer reminds the devout to go to mosque, little children all over the camp chase foreigner aid workers (and journalists) shouting “bye bye, bye bye”, laughing like it’s the funniest thing ever. The resilience of humanity, the ability to find light and peace in even the darkest places, is on display. 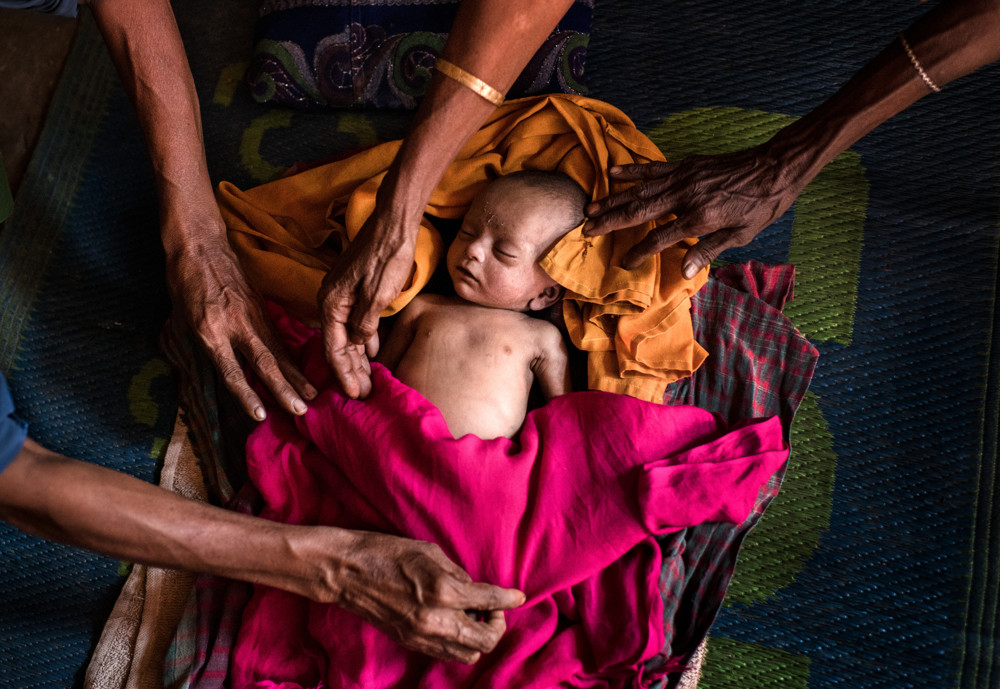 Life continues in the camp – it starts, and it stops, for both the old and, tragically, for the young. One month old Shobic Alom died 12 hours earlier. His parents did no know the exact cause of death, only that he had vomiting and diarrhea.

20 year old Rohingya refugee Zaida Begum gave birth a baby girl, her fourth child, at 2am of the morning this photograph was taken. The child’s name is Omma Habiba.

Children dance at a pre-wedding party in a Rohingya refugee camp. They may have been displaced and live with trauma, but the Rohingya cling to their rituals and beliefs.

Johura cannot see much light. She thinks a lot about the night her family was murdered, of falling into the river as she ran, of climbing up the muddy slope of the riverbank and finding her sister’s body, lying in the shallow grave she was made to dig before she was shot in the face. As Johura stood over the muddy hole, in shock and losing blood from a bullet wound to her hip, she collapsed.

The trip from there to Bangladesh, where she was carried by survivors from her village, was a blur of semi-consciousness. Fortune briefly shone on her during this nightmare. She shook awake just as they passed some boys – from the shoulder of the man carrying her she recognised her 10-year-old brother – her only surviving sibling.

And there is her light. The glimmer of hope in which she might find peace. Neither food, nor friends, nor playing, nor pretty dresses make her happy.
How about you brother – does your brother make you happy? “If my brother is happy, that can make me happy – in here, he is the only one who can.”

Johura Begum (center) with her brother (left) and the extended family members that now care for her in the Bangladeshi refugee camp that is now her home.
Read Next Story
No Peace