In the fall of 2015, Essam Daod was standing on the beach in Lesbos, Greece, when a crowded rubber dinghy packed with refugees landed ashore. Among them was an inconsolable five-year-old Syrian boy named Omar. Daod took him from his mother and pointed at the police helicopter circling overhead: “It’s come to photograph you with big cameras because only the great and the powerful heroes like you can cross the sea!” Omar stopped crying. “Am I a hero?” he asked in Arabic. Assured he was, the boy agreed to show the stranger the boat he arrived in: “I will show you where I sat and how I stopped the waves with my hands, and how I protected everyone,” he boasted.

In that moment Daod, a Palestinian child psychiatrist, realized there was a way to reshape trauma as it happened. Soon after, his mental health organization, Humanity Crew, launched the “Heroes Project” to train rescue volunteers and the Greek coast guard to rewrite the memories of the dangerous journey. 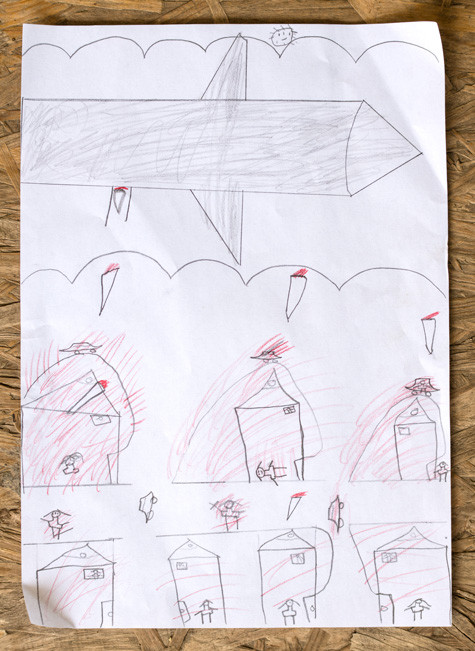 Drawing by Noor Almohamad, 12. “We had hope,” says her mother, “but after our home was destroyed… when my cousin was killed, my brother went missing, when we saw people dead in the street, dead in their homes, people cut in two, then we lost hope.”
“I remember when the airplane came very close with the big noise, and dropped the bomb and people on the street outside were dead” says 14 year old Bidoor Almohamad

Last year, a Syrian-American medical organization announced that the severity of PTSD suffered by Syrian children surpassed the clinical definition and should be renamed “human devastation syndrome.” Mental health care for refugees is an invisible crisis that has remained on the backburner for NGOs and the international community. With little funding for treatment, the 1.5 million refugees who’ve arrived to Europe by sea since 2015 are largely left to grapple with psychological scars on their own.

In Lesbos, 8,000 refugees are trapped after a deal between Europe and Turkey cut off their route into the mainline in 2016. Since then, living conditions and prospects for a life in Europe have deteriorated. The largest camp, Moria, is at double capacity, and some inhabitants having been there for years. A sense of hopelessness and unending detention has driven some to the brink—in May, one refugee set himself on fire outside an asylum office in the camp. 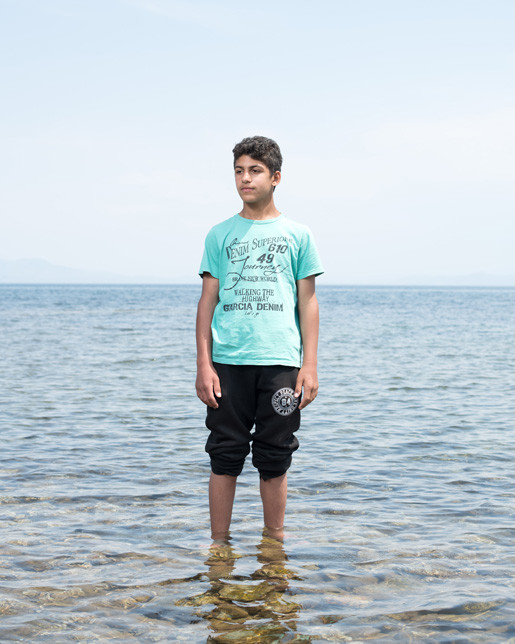 “The people came from Syria to find something better, but they find the same things here… the situation here is so, so bad.” 14 year old Syrian Bilal Al Fadoos.
This island is a big asylum because there is the sea, but there is also the fact that you don’t have rights anymore. You don’t have rights. Médecins Sans Frontières psychiatrist Alessandro Barberio describing the Greek Island of Lesbos, now home to more than 8,000 refugees. 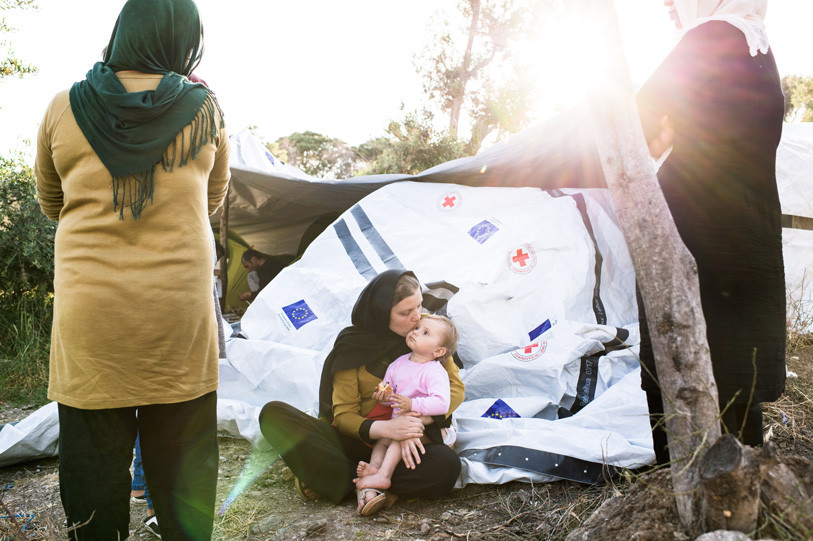 A newly arrived family to Moria camp from Afghanistan. 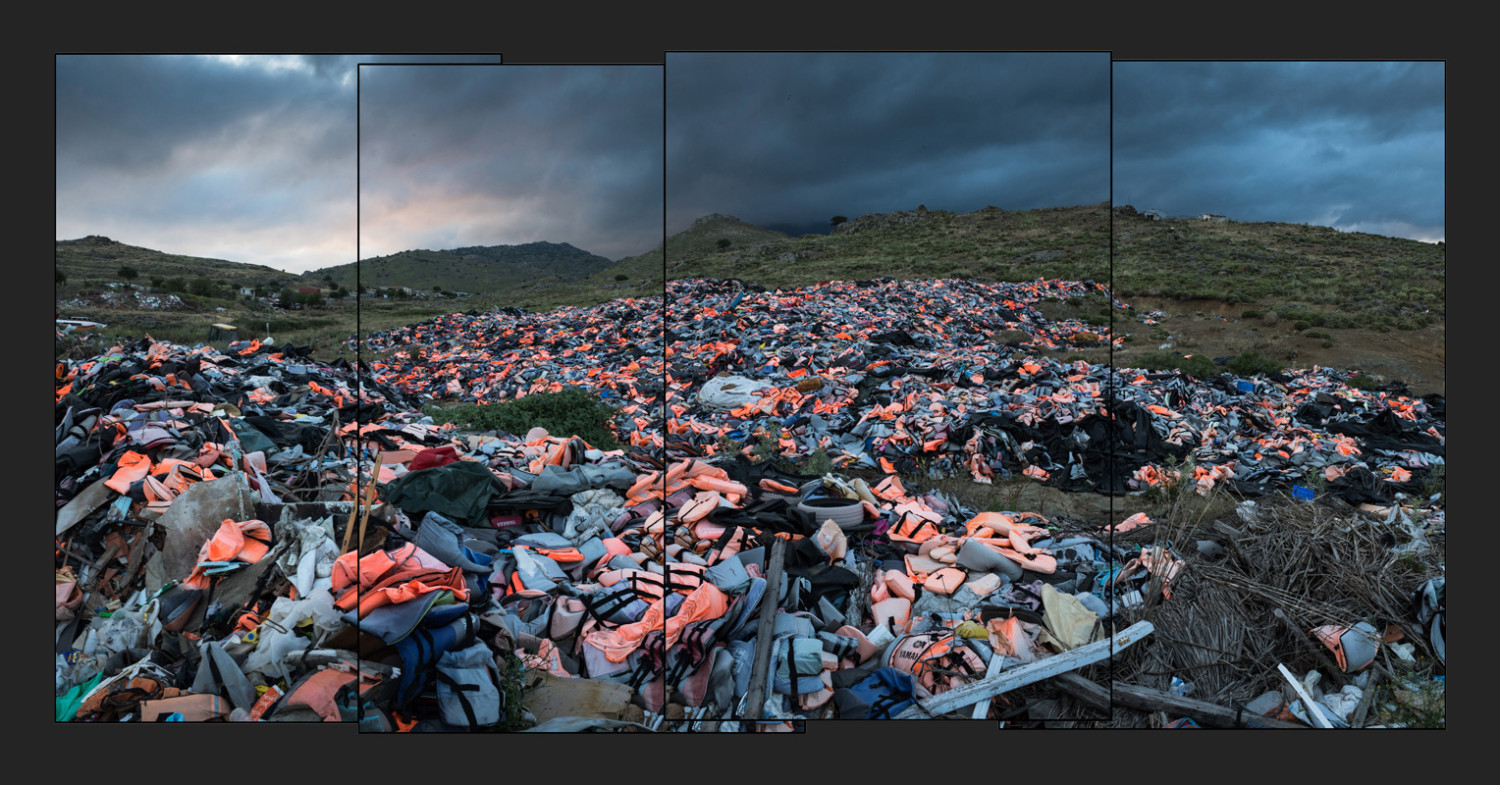 Thousands of life jackets left behind by arriving migrants are heaped at a dump site in Lesbos, Greece. More than 8,000 refugees are stuck on the island awaiting news of their asylum requests. Many hope to travel to mainland Europe.

The scene of a rescue is chaotic: When volunteer rescue crews pull up to a boat, it can spark a panic. The dehydrated, sunbaked passengers shout, cry, and sometimes jump into the open ocean, terrified they’re about to be sent home. Those who came by sea—especially the children—will harbor a fear of the ocean for years to come.

When stunned refugees were pulled on board by crew members trained by Humanity Crew, they would congratulate the children for saving their families, ask for their autographs and take photos. After 15 minutes, the kids would transform. They’d talk confidently about how they’d saved the day. Later, when they settled into a camp in the island of Lesbos, stories and songs would be circulated about their bravery.

“Children’s brains have high elasticity,” says Daod. “If you do the right intervention as the trauma is happening, it allows you to transform a traumatic experience into an empowering one.” 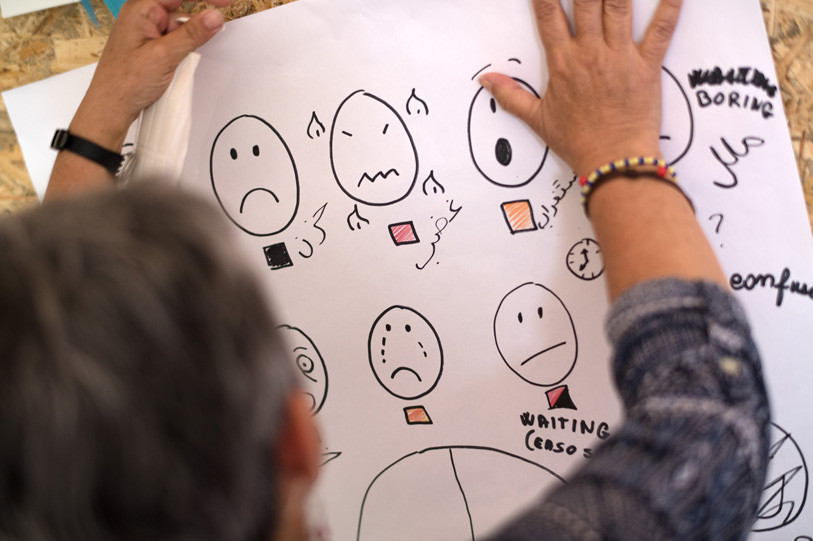 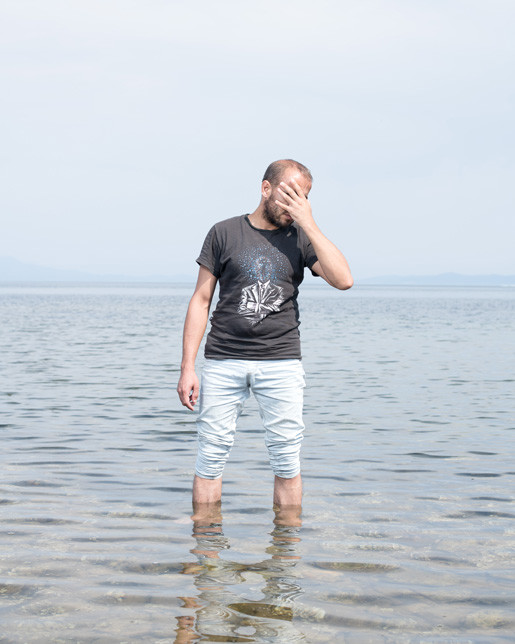 37 year old Syrian Abdul Rahman Al Hamad has been on the Greek Island of Lesbos for one year. He left Syria because he “didn’t want to kill people in the war.”
“In my nightmares I see soldiers killing innocent people shooting them and cutting their throats. I can’t sleep 15 minutes without having this dream… I don’t have any hope for my future, they destroyed everything. They destroyed my dreams.” Abdul Rahman Al Hamad 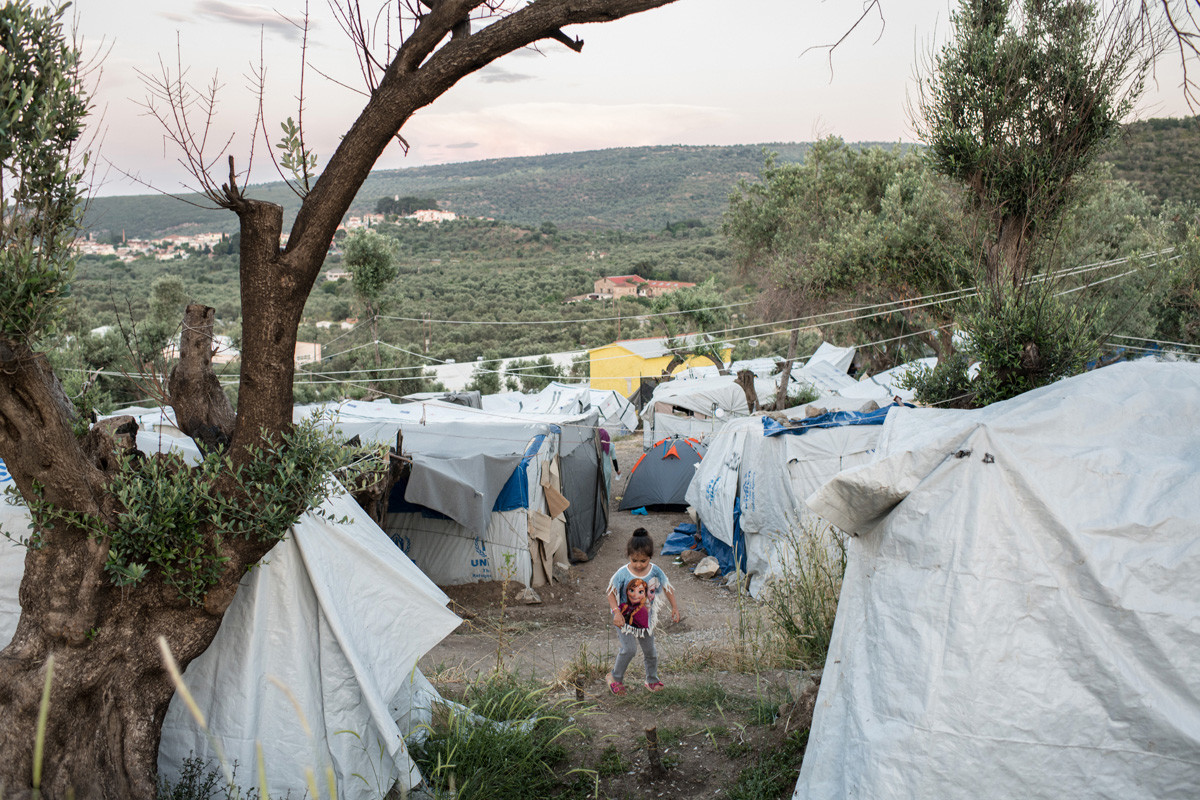 Moria camp in Lesbos is so overfilled that refugees now live in a makeshift overflow camp in an adjacent olive grove. 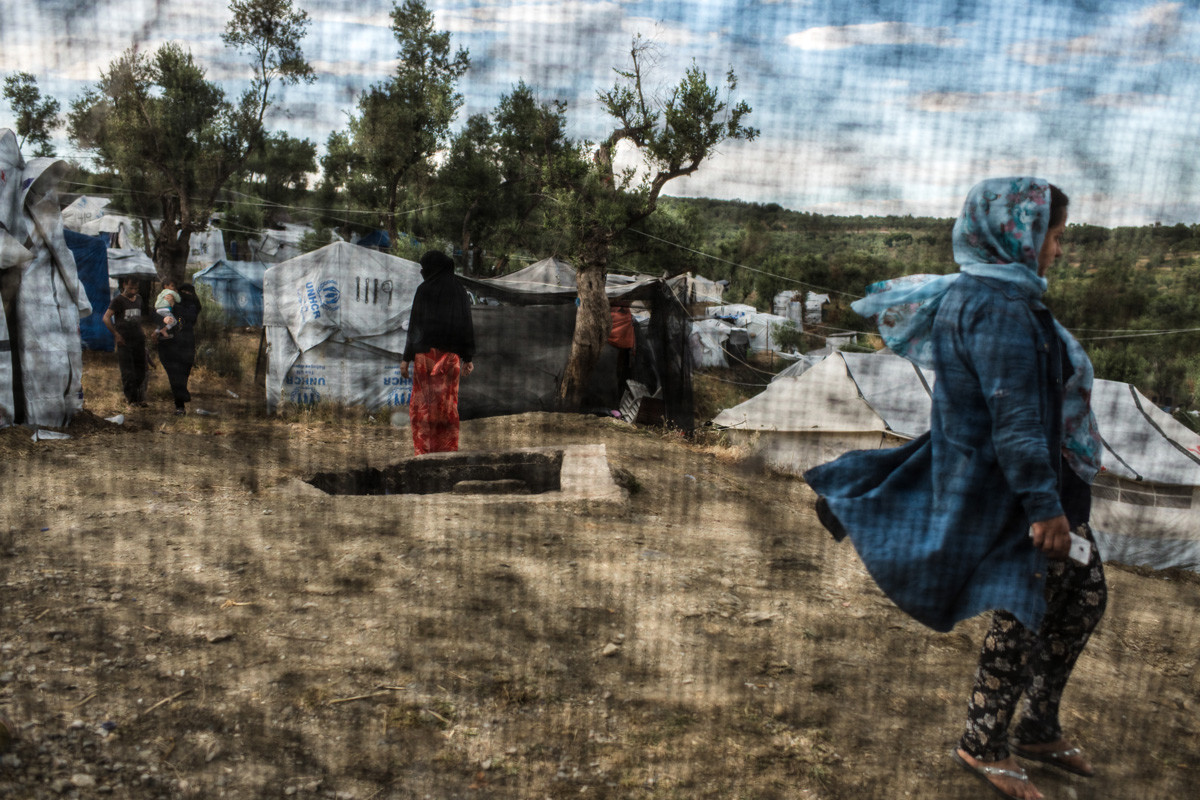 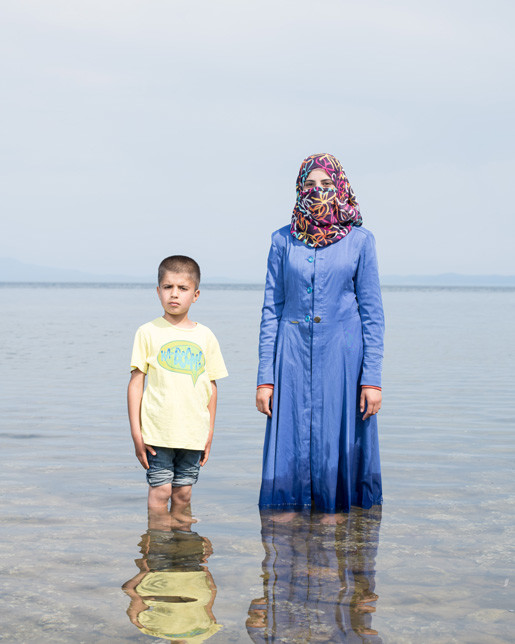 19 year old Kafa Al Nayaf, with her nephew (name withheld), says she fled Syria to escape the bombardment.
“My experience is so bad. They put nine of us in one room, and nobody cares about us at all… in the camps mental health problems become worse.” Kafa Al Nayaf

In 2015, as thousands of refugees were arriving by boat each day, Daod traveled to Lesbos as a volunteer doctor. Later, back home in Israel, he started having nightmares. He was haunted by a child he’d dragged from the water and resuscitated. “Ok I rescued him, I did successful CPR—what else?” thought Daod. “He will be traumatized all his life. If I’m not going to give him the support for his mental health I shouldn’t give him the support for his life.”

To fill the vast, unaddressed need for psychological care he co-founded Humanity Crew. The small team took a new approach: rather than treating psychological trauma as a side effect of displacement, they considered it as—if not more—important as blankets and food. “First aid cannot be just for the body, but also has to be for the mind and the soul.” Daod says.

At sea, they taught rescuers how to reshape the narrative of traumatic events as they happened. Later they began addressing each of the four stages of trauma that every refugee goes through: leaving home, moving into a transit center or camp, seeking asylum, and being resettled in a new country. 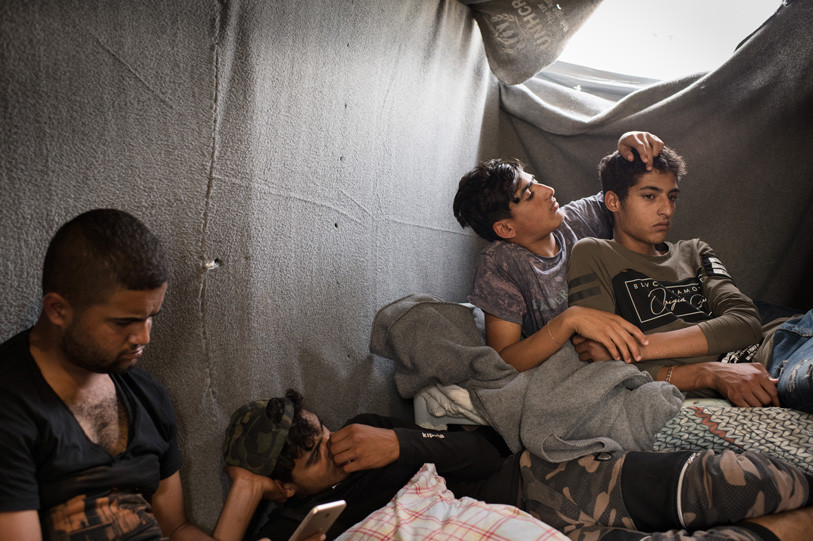 Young men from Deir Ez-Zor, Syria hide from the afternoon sun in Moria camp. They all left Syria, they say, because to stay would mean being forced to fight either for the government or ISIS. 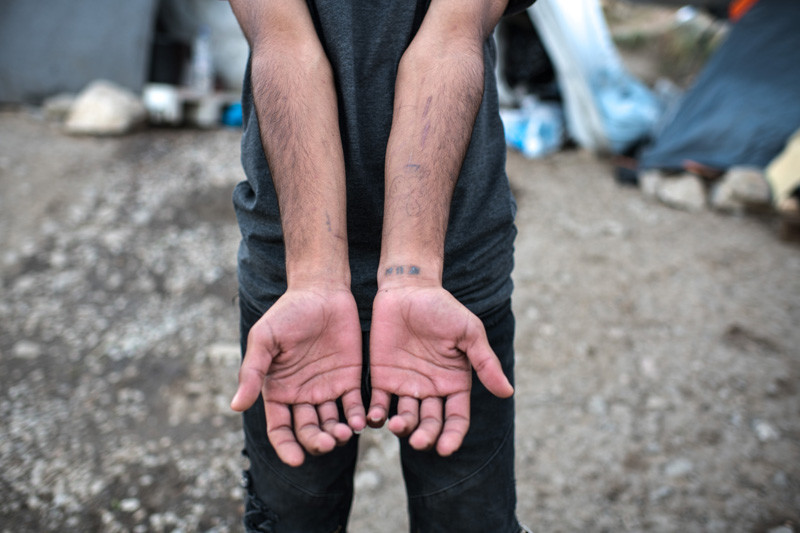 “In 2014, I was 15. I saw the blood of young children, they all died and that’s how I got a mental disorder. I see it in my sleep. It’s always terrifying when I sleep, I see blood and stuff then I get up and cut myself up.” Syrian, Farzat Shahin, 19. 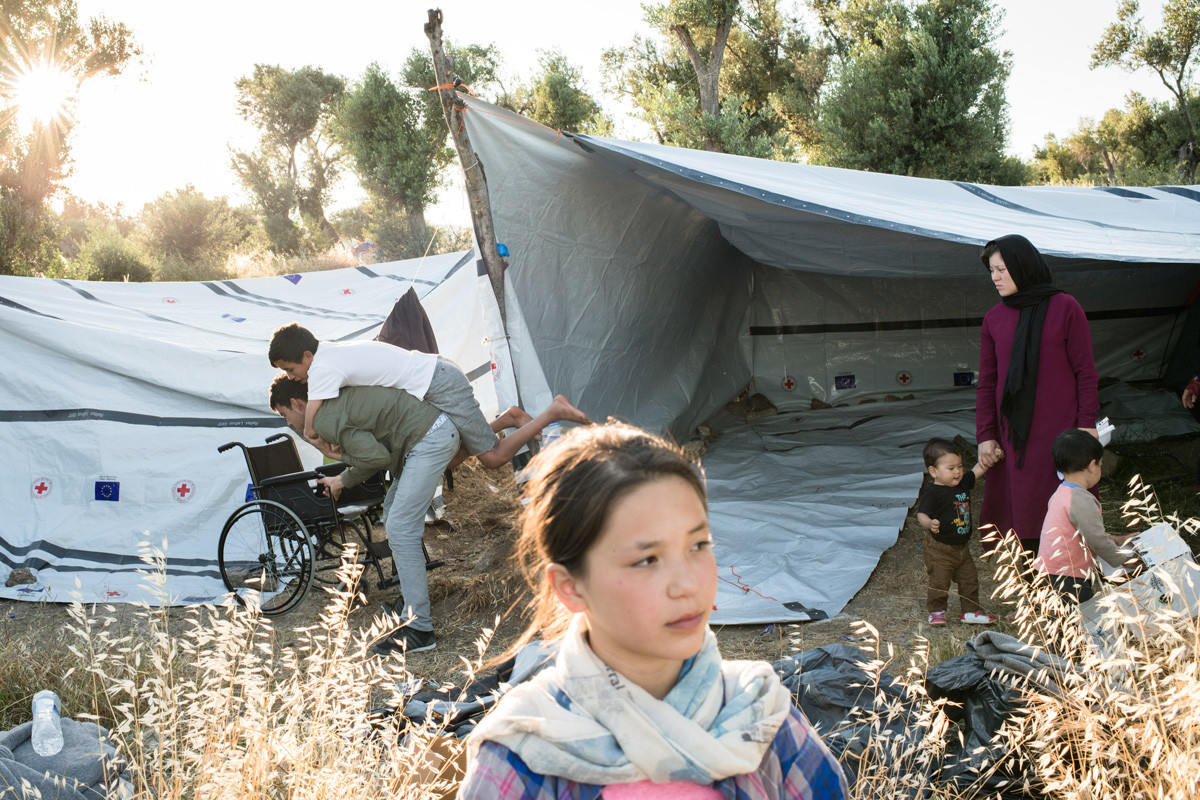 Moria camp has become so overcrowded that it has spilled into neighbouring fields. This recently arrived Afghan family risk having their tent destroyed as they are setting it up outside the official campgrounds. They say, they have nowhere else to go. 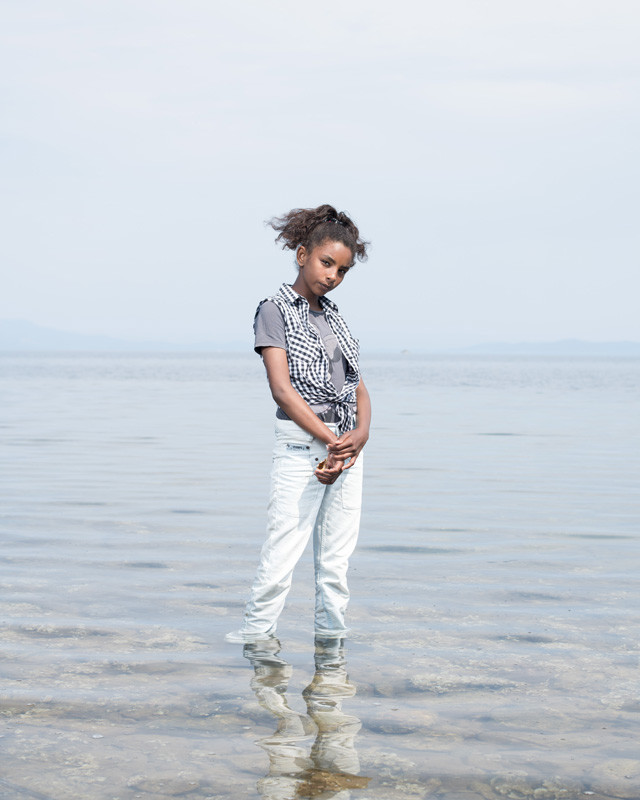 In foreign countries, refugees, particularly minors, encounter a litany of new dangers. With humanitarian needs underfunded—the UN refugee agency is $1.5 billion short of its budget this year—many strike out from ill-equipped and dangerous camps in search of work. There are some 22,500 refugee children in Greece, and only half are in school, according to UNICEF. In most countries, it’s illegal for refugees to get hired in the formal sector, so they take informal jobs—begging, sex work, under-the-table labor.

While awareness about mental health issues among refugees has increased, it remains underfunded and under-addressed. “We need to define emergency human assistance much more broadly and look not just at the physical risks but the psychological risks as well,” says War Child’s Nutt. “There’s a perception that the psychological interventions are ‘soft’ compared to ‘harder’ ones, like how many blankets you hand out and tents you put up.”

In Greece, Daod says the mental health projects that do exist aren’t prioritized—often they’re staffed by people who don’t speak Arabic or understand trauma within the appropriate cultural context. One damaging trend is short-term volunteers who form deep attachments with children and then leave. Unqualified volunteers wouldn’t be deployed to counsel survivors in the aftermath of a school shooting in the U.S., says Daod, and the same should apply to survivors of war in a refugee camp. 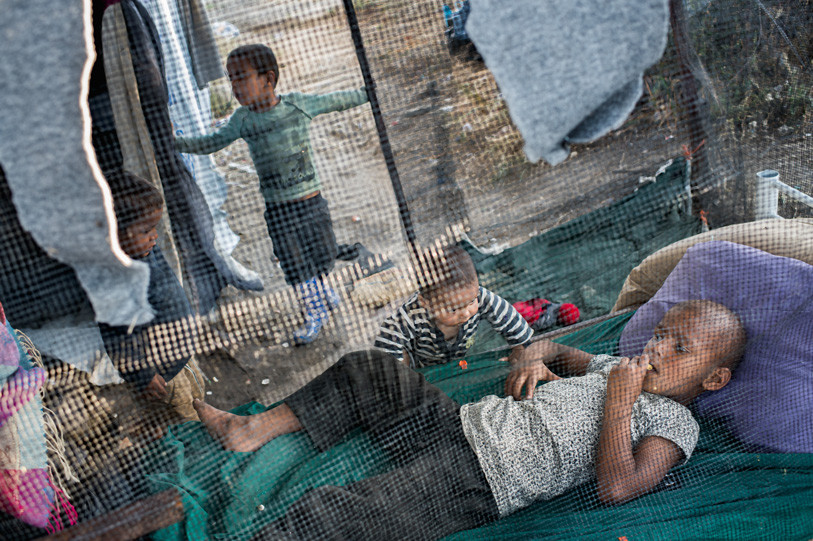 After the European Union struck a deal with Turkey to limit the flow of refugees to its shores, thousands of people have been stuck in limbo on the Greek Islands. Without work or hope for a future in Europe, many suffer from PTSD and depression. 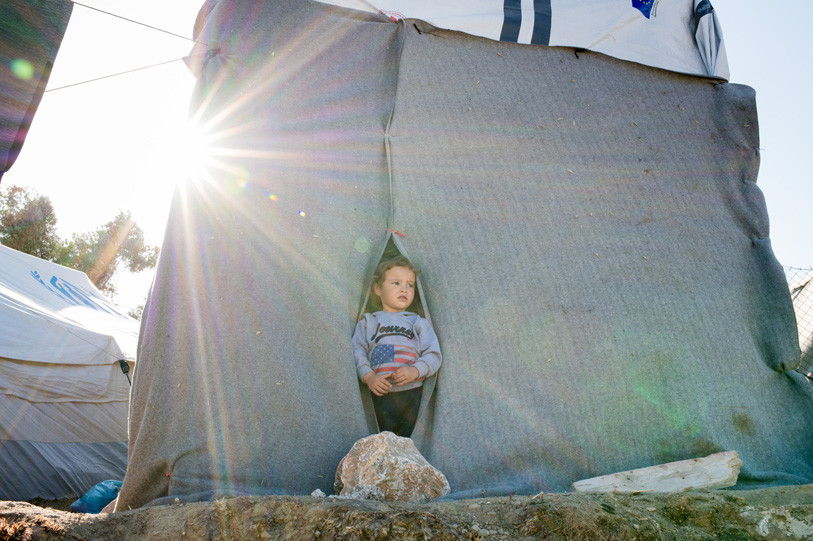 “What they experienced, what they saw, is something that no one child should see. It’s really horrible,” Mental Health Manager Pina Deiana. “Often I tell them I’m sorry for what you had to see because really nobody should see this and less the children.” 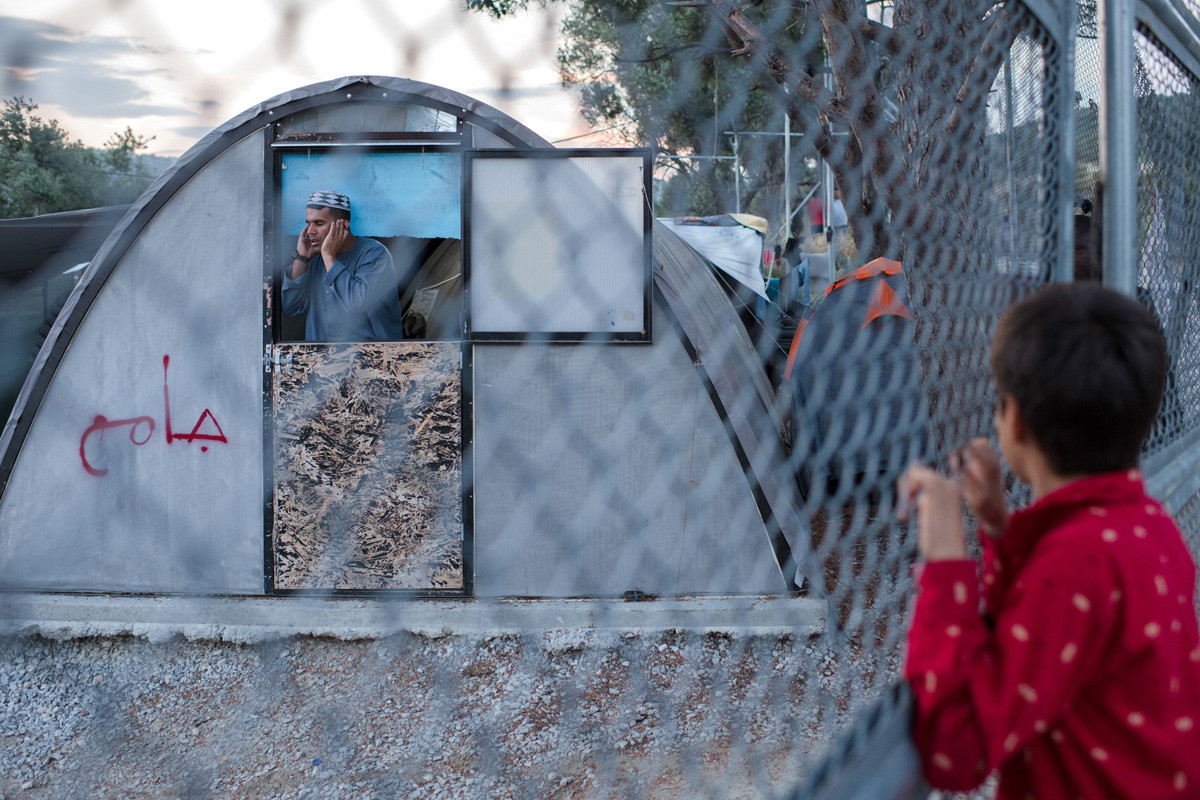 An Imam calls inhabitants of Moria to prayer at the camp Mosque as s boy looks through a fence that divides the official camp from the informal extension. 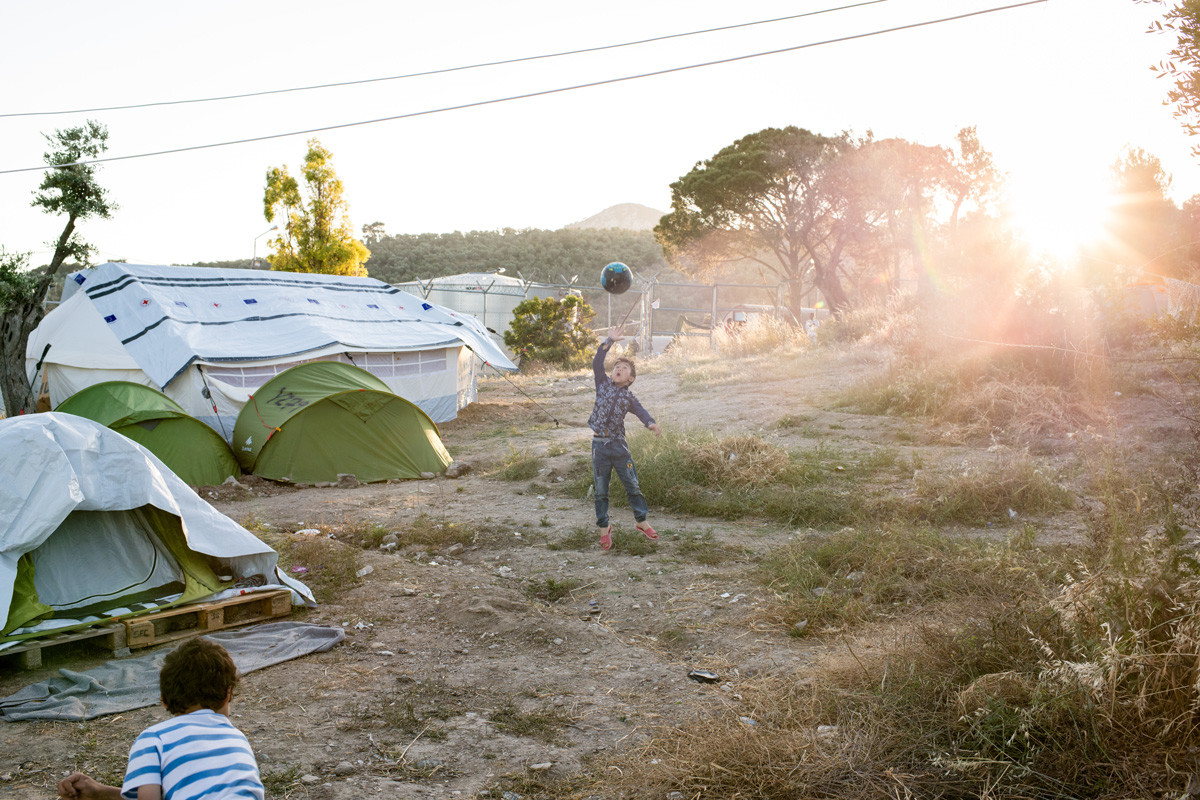 Addressing these issues as early as possible is the most efficient step, but short-sightedness will pave the way for a lost generation. Daod has dark predictions for what will happen if the mental health crisis among refugee youth remains untreated. “Terrorism doesn’t recruit people—it fills gaps and mental health is a huge gap,” he says. “[Extremists] will come and give them meaning when they’re sitting in camps for years in the slums of Athens.”

Whatever the future consequences, those seeking a new life in Europe have seen the darkest side of humanity and are now left in limbo with no way to process it. After war, they have no “normal” to return to. “This idea you can get people back to normal is a mythology,” says Nutt. “What you can do is help people cope but it requires long-term thinking and resources. Unfortunately, for most governments the thinking is very short term and people fall further and further behind.” 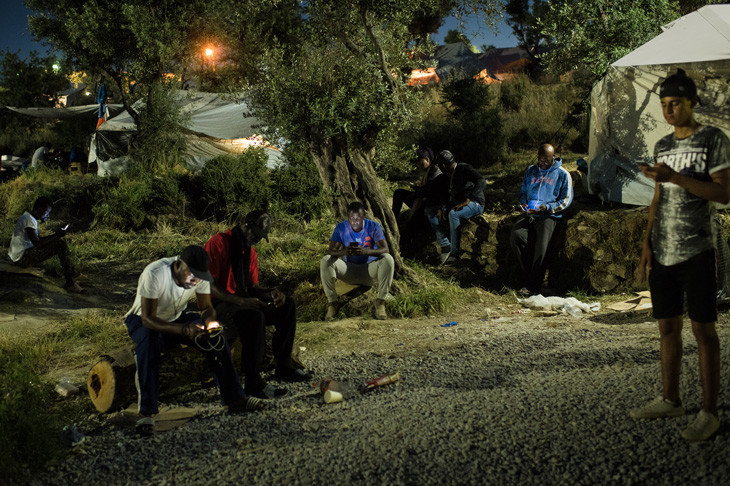 Residents of the overflow camp, known as the Olive Grove, gather around areas where cell phone service is strongest. They contact relatives back at home or in the countries they hope to reach. 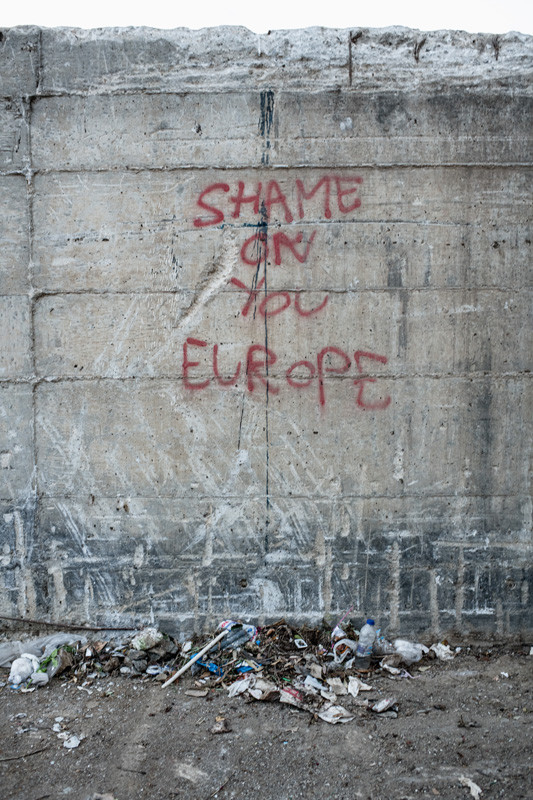